skip to main | skip to sidebar


The 3month average of the unemployment rate ending in July rose from 7.9% to 8.1%. Such dynamics do not reflect seasonal patterns that usually show a drop in the unemployment rate. The employment level rose by a modest 0.9%y/y, down from the 2.0%y/y in June.
Posted by Edward Hugh at 1:29 PM 2 comments:

Peru's foreign-currency debt rating was raised to within one level of investment grade by Moody's Investors Service yestreday as the Peruvian government steadily pays down foreign debt. Moody's increased Peru's credit rating to Ba1 from Ba2, bringing it into line with Brazil, Colombia, Panama and Costa Rica. The outlook for the rating is stable, the New York-based company said in a statement. Earlier this year, Fitch Ratings and Standard & Poor's raised Peru to BBB-, the lowest level of investment grade.

Moody's also cited the reduction in the share of dollar- denominated loans and deposits in Peru's banking system. For the first time in more than two decades, dollar deposits account for less than half of all the deposits in the country, Moody's said.

President Alan Garcia has taken advantage of a jump in revenue from metals exports, surging economic growth and the strongest exchange rate in a decade to buy back dollar- denominated bonds. The government aims to reduce its foreign debt to the equivalent of 13 percent of gross domestic product this year from 18.4 percent at the end of 2007. Peru plans to pay down about $1.1 billion of debt ahead of schedule to the World Bank and Inter-American Development Bank this year after paying off close to $1.3 billion of debt in the first quarter.

Peru's economy expanded 10.4 percent in the first half of 2008 after growing 9 percent last year, its fastest pace since 1994.

Peru's economy is going to grow faster than previously estimated this year because of surging consumer demand, according to Central Bank General Manager Renzo Rossini. He now expects gross domestic product to expand by 9 percent, up from an earlier bank estimate of 8 percent. Inflation will slow to the bank's annual target of no more than 3 percent by the end of 2009 as prices of imported commodities drop, he said.

``The economy is growing at full speed,'' Rossini said. ``Investment continues to come in and consumers are optimistic. Growth is guaranteed for this year.''

The IMF are currently forecasting 7% growth for Peru in 2008, but as we know all these forecasts are subject to very large margins of error. 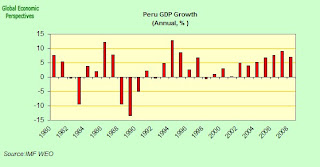 Higher global prices for metals, natural gas and fishmeal, coupled with surging investment and domestic demand, have helped fuel Peru's longest economic expansion. Consumer demand jumped 12.3 percent in the first half. Peru's sol weakened for a fourth day, dropping 1.6 percent to 2.8585 per dollar at 12:55 p.m. The currency has gained 4.9 percent this year.
Posted by Edward Hugh at 2:08 AM No comments:

Peru's central bank raised its overnight rate for the sixth time in less than a year in a bid to slow the fastest inflation since 1998. The bank raised the benchmark rate a quarter-point to 6.25 percent as policy makers seek to bring inflation into their target range of 1-to-3 percent. 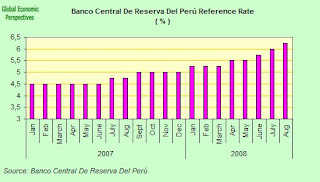 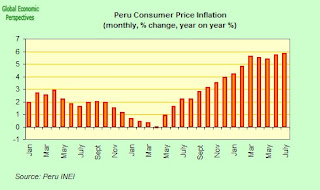 Food prices have risen 9.7 percent in the past 12 months. Core inflation was 4.7 percent in the year through July, wile overall consumer prices are up 4.1 percent, the highest rate in the January-through-July period since the 6 percent rise recorded in the first seven months of 1997.

After expanding 9 percent in 2007, Peru's economy grew 10.2 percent in the first half of 2008, according to the Finance Ministry. Peru's gross domestic product last expanded at a faster pace since the second quarter of 1995, when GDP rose 11 percent from the same quarter a year earlier.

The economy will grow 8 percent this year on surging manufacturing, construction and retail sales, according to the central bank. Consumer demand grew 8 percent in the first half, while private investment rose 19 percent.
Posted by Edward Hugh at 11:13 PM No comments:

Claus Vistesen and Edward Hugh are proud and happy to announce that they are now working as "featured analysts" with a new Boston-based start-up - Emerginvest.

Claus and Edward have used a new, updated, methodology in order to identify a group of 13 emerging economies which we consider are going to outperform both the rest of the emerging economy group and the OECD economies in terms of a number of key performance indicators over the 2008 - 2020 horizon.

Through our association with Emerginvest we hope to develop performance indicators which will confirm both the relevance and validity of the selection procedure adopted.

We would like to point out that we have absolutely no financial connection whatsoever with Emerginvest - although we do heartily endorse what they are trying to do.

In particular we see the move by the investment community towards emerging markets as one of the most effective and direct ways to address those issues of inter-country wealth and income imbalances which have plagued our planet for so long now - namely by getting the money from the rich who have it to the poor who need it.

Sending investment to emerging economies is also a way of addressing the underlying imbalances which exist between the relatively older populations of the developed economies who increasingly need to save, and the relatively younger emerging economies who can benefit from the investment of those savings in their countries. So in a way you can both ensure the future of your own pension and help attack poverty at one and the same time. This type of possibility is normally known in economics as "win-win".

More theoretical background on the methodology behind this choice can be found across the posts in our Demography Matters and Global Economy Matters blogs.

The oldest known source and most probable origin for the expression "baker's dozen" dates to the 13th century in one of the earliest English statutes, instituted during the reign of Henry III (r. 1216-1272), called the Assize of Bread and Ale. Bakers who were found to have shortchanged customers could be liable to severe punishment. To guard against the punishment of losing a hand to an axe, a baker would give 13 for the price of 12, to be certain of not being known as a cheat. Specifically, the practice of baking 13 items for an intended dozen was to prevent "short measure", on the basis that one of the 13 could be lost, eaten, burnt or ruined in some way, leaving the baker with the original dozen.

Claus Vistesen is a 23 year old macroeconomist who is on the point of finishing his MSc in Applied Economics and Finance from the Copenhagen Business School. His primary research interests are international finance and international macroeconomics. Claus is especially interested in how the changing structure of global and national demographics impacts on local macroeconomic performance. Moreover - and as the wonk he ultimately is - he also takes a considerable interest issues and methodologies associated with econometrics, and this is an interest he intends to develop in his postgraduate research.

Claus is a regular contributor to: Edward 'the bonobo' is a Catalan macroeconomist and economic demographer of British extraction, now based in Barcelona. By inclination he is a macroeconomist, but his deep-seated obsession with trying to understand the economic impact of contemporary demographic changes has often taken him far from home, off and away from the more tranquil and placid pastures of the dismal science, into the bracken and thicket of demography, anthropology, biology, sociology and systems theory. All of which has lead him to ask himself whether Thomas Wolfe was not in fact right when he asserted that the fact of the matter is "you can never go home again".

He is currently working on a book with the provisional working title "Population, the Ultimate Non-renewable Resource".